Especially, it is being used for Rear Screen as well.

Smart Tint is made of two layers of transparent conductive film sandwiched with PDLC material. The film is then laminated between two pieces of glass. When electricity is applied to the film the liquid crystals line up and the window is clear. When the power is turned off, the liquid crystals return to their normal scattering positions and turn the glass from clear to translucent.

The Liquid Crystal Privacy film is sandwiched between the glass make up in a similar way to that Laminated glass is constructed. The outside skins are made up of glass (normally 5 or 6mm annealed glass) each side, then a PVB interlayer is inserted on each side to trap and hold the Liquid Crystal Privacy film
Smart Tint can be used as a projection screen in which you could watch home movies, give presentations, advertise for store, or whatever else you can think of to use it for.  It is a product with an infinite amount of applications.  check out smart tint at smarttint.com for more details.
Smart Tint completed Reebok's display boxes and is powered on to its transparent state as shown in image below.

Smart Tint is shown powered off, revealing the sneakers inside. 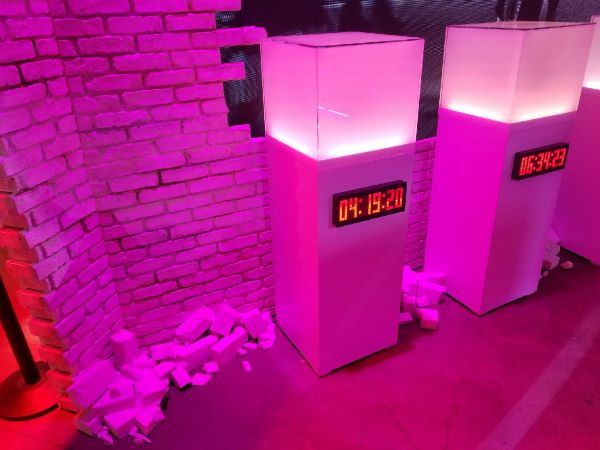